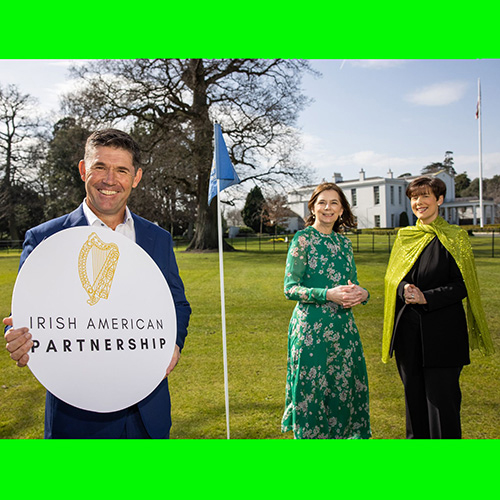 In Harrington’s honor, the Partnership launches a $250,000 investment in an Outdoor Play & Learning program in Primary Schools.

DUBLIN, IRELAND - March 22, 2022 – The Irish American Partnership announced that renowned Irish champion golfer, Pádraig Harrington, has been named its Patron at a reception today at US Ambassador to Ireland, Claire D. Cronin’s residence in the Phoenix Park, Dublin. The patronage honors Harrington’s roots and reflects his belief in using sport to bring people from different backgrounds and communities together; bolstering support of Irish schools and community organizations.

To mark Harrington’s patronage, the Partnership, in collaboration with Ireland's Department of Education, will launch the Outdoor Play & Learning program providing $250,000 funding for primary schools to purchase resources that enhance outdoor play and learning. Outdoor Play & Learning has been developed in response to the great need identified by principals and teachers to encourage young people to get outside particularly in the wake of virtual learning necessitated by COVID-19.

Harrington said: “With a wonderful family I feel extremely privileged to be in the position I am. How many of us get paid to do something we love so much? I do appreciate, however, that there are others who are less fortunate. The Partnership plays such a vital and unsung role in supporting young people in some of Ireland’s most underprivileged areas. I have been so impressed with the Board and team and their tireless efforts to champion young people, and I’m proud to join them as a Patron.”

The reception was attended by 25 guests from academia, sports, business, and included staff and Board members of the Irish American Partnership.

Ambassador Claire Cronin said: “The Partnership builds upon the vital connections between the United States and Ireland through targeted grassroots donations to empower Ireland’s young people. Like Padraig, I am delighted to see their impact across the island and thank them for their investment in the Outdoor Play & Learning initiative.”

For over thirty-five years the Partnership’s mission has been to invest in Ireland’s future—its youth. The Partnership has targeted its funding – more than $50 million raised – where it has the greatest impact, so that every child can have the resources they need to learn, and to grow.

Minister for Education, Norma Foley, TD said: “School communities have done an exceptional job in adapting to the changes required to operate safely in a Covid-19 environment. We are delighted to continue our long-standing relationship with the Irish American Partnership and thank Patron Pádraig Harrington, and the members of the Partnership as we welcome this wonderful investment to resource fun and engaging outside play areas for our young learners.”

Chicago-based and Dublin-born Michael Clune, Chair of the Partnership’s Board of Directors, said: “We are delighted to welcome Pádraig aboard as Patron. His passion for Ireland combined with his commitment to children and young people will be hugely instrumental in helping raise awareness of our organization’s work. Having worked with the Partnership team myself for over twenty-five years, I have seen firsthand the benefits of the educational programs that we have supported in Ireland.”

Mary Sugrue, Chief Executive of the Partnership, welcomed Harrington: “It is incredibly exciting to have such a fantastic Irish sportsperson joining us as Patron. Pádraig will be a tremendous asset in our mission to inspire the next generation. As a Dublin native, he knows the impact the Partnership’s work has on the ground in schools and communities up and down the country. On behalf of everyone at the organization, I want to extend our sincere thanks to Pádraig.”

As a three-time major champion, Pádraig Harrington is one of the world’s top golfers and his playing record speaks for itself. Following a very successful amateur career, including winning the Walker Cup in 1995 at Royal Porthcawl in one of his three appearances, he turned professional in September 1995, before securing his maiden victory in only his tenth tournament as a professional. He led the European Tour Order of Merit in 2006, before winning the 2007 Open Championship, as well as the Open and PGA Championships in 2008. He spent over 300 weeks in the top-10 of the world rankings and reached a career-high ranking of third in July 2008. With a career total of 31 victories around the world, Harrington continues to compete at the elite level on the European DP World Tour, the PGA Tour and the PGA Champions Tour, and achieved the great distinction of being appointed Captain of the European team for the 2020 Ryder Cup, which took place at Whistling Straits in September 2021. As a player, he was a regular in the side for over a decade, winning on four occasions, and was also a Vice-Captain for three Ryder Cups. Deeply passionate about giving back, Harrington raises funds for the Pádraig Harrington Charitable Foundation through various events and activities and is also a Patron for Make-A-Wish, GOAL, the Irish Youth Foundation and the Oesophageal Cancer Fund, as well as an Ambassador for Special Olympics and the R&A. Born in Dublin, Ireland, Pádraig is a proud family man married to Caroline with two children, Patrick and Ciaran. More: www.padraigharrington.com

ABOUT THE IRISH AMERICAN PARTNERSHIP

Since 1986, the Irish American Partnership has raised more than $50+ Million in support of schools and communities across the island of Ireland. The Partnership facilitates this investment in Ireland’s future with 100 cents of every dollar going directly to programs in Ireland. Dedicated to connecting Irish America and friends of Ireland to their Irish heritage through direct giving – the Partnership invests in education, supports peace and reconciliation initiatives in Northern Ireland, funds community organizations, grants university access scholarships, creates education centers for homeless youth, champions Gaelic games, promotes Irish arts, culture, and more, nurturing the next generation of global leaders. The Partnership is a dynamic, grassroots organization that is respected and endorsed by leaders across education, community, and government sectors.