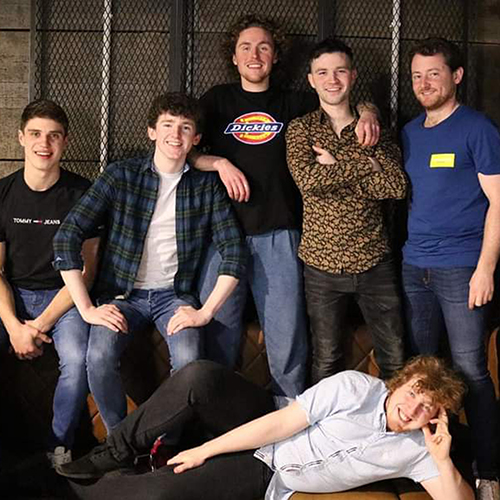 As in many areas of arts and culture, Ireland has exported an impressive number of popular musicians who have found stardom across the globe, from Van Morrison and the Dubliners in the 1960s and 1970s, continuing with U2, the Cranberries, Enya, Sinead O’Connor, and the Pogues in the 1980s and 1990s, and Hozier within the past decade. The Tumbling Paddies may be next in line.
Comprised of six young men– as in, some of them would not be able to legally buy a beer here in the United States - from Country Fermanagh, the Tumbling Paddies are no secret in their native land. They have already released four songs that rose to the top of the United Kingdom and Ireland iTunes charts, and they were recognized as the “Best Country Folk Band’ during last year’s Red Carpet Music Awards in the Netherlands.
Originally, the group called themselves the Paddies, until they crashed their van coming home from their very first gig, and it tumbled down a hill into a field. Thankfully, no one was injured and the Tumbling Paddies were born.
Gareth Maguire, the group’s lead singer who also plays tin whistle, is grateful to be a part of the band and excited for the future.
“I love playing each week with the lads as we were great friends before we even joined the band,” he said. “It’s not like work when you’re having fun with your mates and enjoying the fun on stage. We can’t get enough of it and now we are going full time into it.”
Rounding out the band, John McCann plays drums, Martin Tracy the accordion, Ciaran Owens the banjo, Lee Jones guitar, and Oisin McManus plays the keyboard. Andrew Cox serves as the band manager and co-writer of select songs, including “Pretty Girl,” which became a huge hit when it was released.
“It is brilliant working with such a talented bunch of singers and musicians,” Cox remarked, “and it's great co-writing songs with them and hearing them come to life on the radio a few weeks later. They are filling every venue at the moment up and down the country.”.
At first listen, music lovers will be drawn to the energetic, catchy, and distinctively Irish sound of the Tumbling Paddies’ music, but a closer examination of their lyrics reveals a depth of emotion that belies the young ages of the band members. Take, for example, some of the opening lyrics of their song “Untold Story:”
“Girl we just fell short of heaven
As we fell right into hell
What could have been
What should have been
Who knows who can tell?”
Most recently, the Tumbling Paddies released a cover of the Cranberries’ classic alternative rock song “Zombie” that is a must-listen version of one of the most enduring artistic expressions to come out of the Troubles era.
As the live music world opens up from a difficult two years in the COVID-19 pandemic, the Tumbling Paddies are excited for a busy 2022, embarking on an extensive tour of Europe and the release of two new albums, with tentative plans to cross the Atlantic for gigs in the United States next March.