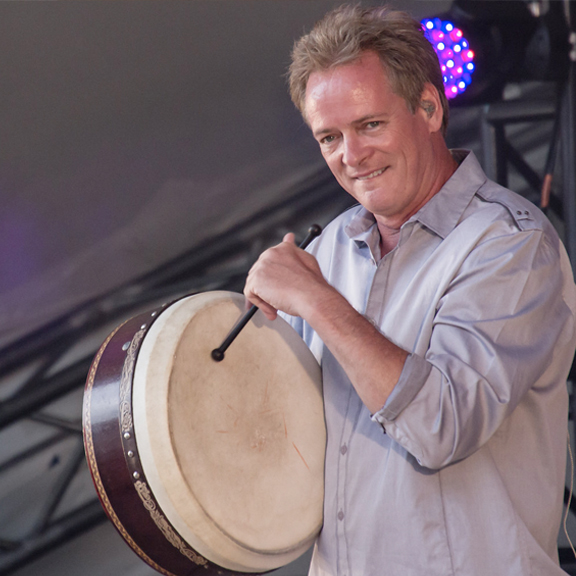 As a young lad, Ian Byrne, used to wander the hills and valleys of Avoca, a small village located near Arklow, County Wicklow, Ireland. In fact, his Da, grandad and uncles all worked in the Avoca Copper Mines. His family lived in a white two-story home nestled amongst the green hills in an area known as The White Bridge.

“I know those rivers and valleys like the back of my hand,” Byrne said.

Byrne left Ireland in 1987 with his American wife, Kathy, and their one-year old son, making their new home in Kansas City, Mo., to pursue his American dream. Through hard work, his dreams came true, yet the rhythm, sounds and sites of Ireland were always close to his heart.

Lead Singer of the Celtic Rock Band, The Elders
Today, Byrne is the lead singer of the The Elders, who had been together for 20 years before hanging up their instruments in 2019 to retire. Tragically, one of the founding members, Steve Phillips, died from complications from an underlying disease after contracting COVID-19 the following year in 2020.

But the lads couldn’t help but get together and write songs during retirement. The Elders have decided to release another album, called “Well Alright Then,” appropriately due out on St. Patrick’s Day, March 17th, 2022.

The tunes on the new album are all original songs born out of emotions and feelings from lifeevents, written and produced by The Elders,     including the late Steve Phillips. Several guest artists also contributed to “Well Alright Then.”

The Elders’ toe-tapping songs feature story lines with vibrant narratives that explore history, legends, and true-life experiences. The band’s mesh of styles, textures, and soaring vocals have become its trademark.

The band traveled nationwide in the United States and throughout Europe playing over 100 shows a year. In addition, they have traveled to Ireland with almost 150 fans for a 10-day tour every year, and made their 16th and final trip to Ireland in October 2018.

ABOUT THE ELDERS: The Elders have a passion for music rooted in Americana and Celtic folk rock. Their ability to bring together the art of storytelling with elements both musically progressive and rooted in tradition, has won them a broad international fan base, as well as critical acclaim in numerous publications such as PASTE Magazine, Folk & Acoustic Music Exchange, Music Row Magazine, Goldmine Magazine, TRAD Magazine (France), Chicago Sun-Times, etc. Lead singer Ian Byrne’s sings with poignant notes and whimsical phrases.

They're Back! Who? Celtic Rockers The Elders! "Well Alright Then"
Kansas City, Mo---"Well Alright Then" is the new album Celtic rockers “The Elders” will release on St. Patrick's day, March 17, 2022.
The new album was conceived after the band retired in 2019, after twenty years on the road, but retirement couldn’t prevent band members from collaborating musically.
Storytelling “The Elders Way” best describes the 15 tracks -- from “Old Man Dan” to “We Are Same,” a single recently released regionally.
The tunes are all original songs born out of emotions and feelings from life events, written and produced by The Elders, including the late Steve Phillips. Several guest artists also contributed to “Well Alright Then.”
The Elders music can be heard on a variety of musical social platforms and with this new album, the band promises some live performance dates this year.
www.eldersmusic.com