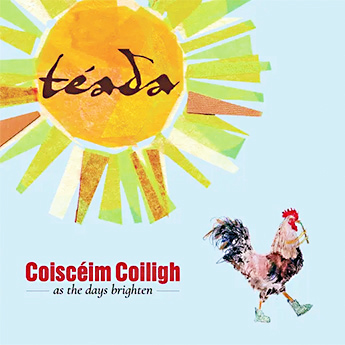 The album’s Irish title refers to an old expression as winter receded and the skies brightened, the days are stretching by “a rooster’s step.”

The new album finds Téada (pronounced TAY-dah) in an optimistic mood. The band is in fierce form on their customary re-energizing of rare tunes from the tradition, paying tribute to their musical heroes. They also shine a light on new tunes and contemporary composers including Carl Hession, Johnny Óg Connolly, and Teada’s own Tristan Rosenstock. A chance Dingle pub session with The Dubliners legend John Sheahan brought his composition ‘Among Friends’ to the album. “The band were so taken with the tune that we spent the following morning working out an arrangement, taking a forced break from the studio due to a power cut!” says Téada fiddler Oisín Mac Diarmada (pronounced O-sheen Mac Der-mudduh).

Actor John C Reilly (top left) (currently starring in HBO’s Winning Time: The Rise of the Lakers Dynasty) came to the album after striking up a friendship with Séamus Begley while visiting Ireland to promote his Stan & Ollie movie in 2019. “They hit it off inspired by their mutual love of Irish songs and County Kerry!” says Mac Diarmada. Later that year, John C joined Séamus and Oisín on stage in Los Angeles and a collaboration idea was born.

Begley’s vocals were recorded by Donogh Hennessey in his Dingle studios, along with the rest of the album.

Reilly and Begley chose the light-hearted song “Eileen Óg” by Irishman Percy French (1854-1920). “The song provides the ideal tapestry to blend John C’s rich theatrical vocal talents along with Séamus’ unique sensitivity and nuance,” says Mac Diarmada. Adds Begley, “Now after finding a house of his dreams here it looks like John C will be spending more time in his beloved Kerry. I look forward to more late-night singing sessions and revelry in the local hostelries!” The song is available as a free download at teada.com.

From their early days as “Best Traditional Newcomers” in Irish Music Magazine, Téada (‘strings’ in Irish) have been hailed for “keeping the traditional flag flying at full mast”   The Irish Times

With a fresh raft of tunes along with the brilliant vocals of Irish legend Seamus Begley, the new album is a confident statement from a band in its prime.